By FRIEDRICH KUNZMANN
May 12, 2018
Sign in to view read count 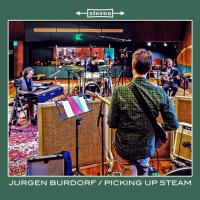 Picking up Steam is Dutch guitarist Jurgen Burdorf's third album in as many years. Like its predecessors, it finds Burdorf's punchy guitar at the center of a quartet—putting on show his diversified skillset which ranges from Americana to blues, jazz and funk, making for a juicy set of fusion tunes.

Seeing how all the musicians involved play at the top of their game and create a tightly grooving structure, the compositions rightfully rest less on the demanding, but rather give the rhythm section calm waters to level out at and get grooving. Jams, such as the title song or "Tools And Enemies," are based on simple blues-formulas and give Burdorf the ideal conditions for showing off some rocking country twang. "The Plot Thickens" on the other hand, while still energetic, sees the band taking a more 1970s fusion approach. Key-master Tico Pierhagen takes the reins for some slick Rhodes lines here before switching to organ on the driving "Let's Give It A try."

While never genre bending or challenging in its harmonic or melodic approach, Picking Up Steam remains an entertaining ride throughout, due, among other things, to terrific musicianship and memorable melodies. Fans of Alan Holdsworth should find plenty to enjoy on the slow-paced "Planetary Motion," while Burdorf's twang—at times reminiscent of John Scofield's approach—returns for a crunchy "Trashcan Shuffle."

One might compare Burdorf's approach to composition and guitar playing to that of Julian Lage. The main difference between the two is the production. In Lage's case, this leans towards subtle jazz aesthetics, while on Picking Up Steam it is more cleaned up and filled with plenty of reverb, leaning toward the blues-rock side of things. The more rock-oriented vibe gives this record the finishing punch that makes it so enjoyable. The seventh title rather sums up the album: "Danger and Play."

Picking Up Steam; Step On It; Tools And Enemies; Season Of The Soul; The Plot Thickens; Let's Give It A Try; Danger And Play; Planetary Motion; Trashcan Shuffle; Telescope Of Truth; Watching The Grass Grow.