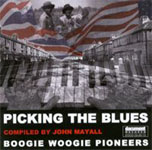 Barrelhouse piano combined various different proportions of blues, ragtime and dance rhythms in the hands of technically unorthodox players. Jelly Roll Morton spoke of "specialists —each with a tiny repertoire nobody else could play. Bang on!

Versatile Little Brother Montgomery's "No Special Rider" is a slower medium-tempo vocal blues with a walking bass. Was Jesse James' one recording date granted as his last wish as a death cell prisoner? So said legend, factually dubious but actually apt to the vocal desperation on "Lonesome Day Blues," with dissonant hammering right hand over rolling bass.

"Otis In The Dark" returns to Chicago, 1960. Otis Spann, son of a legendary Mississippi pianist and pupil of Brother Montgomery, was possibly the last direct representative of pre-war tradition. Yet the dragging bass is new, on a magnificent fast blues by the longtime engine of the Muddy Waters band.

Maybe it's no coincidence that there's no duplication with the Document-licensed and soon-to-be-reissued Piano Blues: The Essential (Classic Blues CBL 200004). Perhaps this fact helped Mayall to focus?