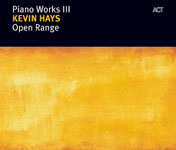 Pianist Kevin Hays came to prominence in New York in the '80s, eventually working with such luminaries as Sonny Rollins, Benny Golson, Roy Haynes, Joe Henderson, Art Farmer and John Scofield, among others. In the '90s, he recorded a well-received series of sessions for Blue Note, including '94's Seventh Sense (one of the New York Times' "Top 40 Jazz Releases of the Year ) and '96's Andalucia (which featured Ron Carter and Jack DeJohnette). Now, relocated to Santa Fe, New Mexico, he remains active both stateside and abroad.

This current solo piano offering, Piano Works III: Open Range, finds him in a contemplative mood. He states that the serenity he finds in his "new surroundings [is] clearly reflected in the music. And one hears this reflected on the CD's first track, "Open Range. All the compositions, save one, are originals. And, as a player, Hays has a beautiful touch and control, and the engineer captures his sound to full advantage, especially at the acoustic piano.

At times, Hays captures the flavor of vintage Americana that Charlie Haden has mined so effectively, especially on his Verve excursion with Pat Metheny ('96's Beyond the Missouri Sky). Hays' hymn-flavored reading of "You Are My Sunshine is especially affecting as his piano cadences frame his vocal perfectly. "Humming Bird Song pays homage to "traditional Native American songs, but one wishes that he had expanded the piece to include a more complete piano statement, rather than simply accompanying the affecting vocal sample from Traditional Chants & Flute Music of The American Indian. The session's last piece, "Sacred Circles, works so well because it is so unassuming.

As beautiful as these austere compositions are, eventually, sameness sets in and variety is lacking. Different moods would go a long way in setting off and highlighting some of the more ethereal themes, providing some fire to the excess of meditation found here. It is good, however, to hear Hays. His mind is fertile, his musicianship solid and his next session may offer the variety missing in this set.