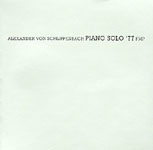 Pianist Alexander von Schlippenbach hasn't so much refined his art over the course of his decades-long career as he has redefined his musical personality according to the demands of the setting he's working in and the musical company he's keeping. While that suggests adaptability, that tendency is tempered by the simultaneous singularity of his musical personality. This recital from 1977 is, therefore, a record of a work in progress, just as any recording of this pianist's trio is with saxophonist Evan Parker and percussionist Paul Lovens.

In his booklet note for this release, von Schlippenbach discusses the basement studio where this set was recorded and how its ambience was one of mild sensory deprivation. This windowless room ensured he had no visual contact with the outside world, and the resulting focus he was afforded permeates every note. Thus, the hyperactivity of the opening "Brooks" is music for an ant colony in its evocation of restlessness, of progression which, on the surface, serves no deeper purpose. Only with the music's development is it revealed how deceptive that impression is as Von Schlippenbach—even at this relatively early stage in his career—proves himself to be a master of the moment. The very sound of the piano—bright, dry, and immediate—becomes an integral element of the performance, especially in the middle and lower registers, while von Schlippenbach shows the degree to which he was an acolyte of Cecil Taylor.

Elsewhere, however, he is far more his own man. The first part of "The Onliest - The Loneliest" is an exercise in reflection that owes little allegiance to anyone. Perhaps Thelonious Monk's precedent might be cited in terms of von Schlippenbach's way with an interval,l but it doesn't alter the fact that the piece's illogical progress is entirely the product of his own sensibility.

On the second part of "The Onliest - The Loneliest," a theme carries over, although on the music's underlying nature seems more fraught. Even while he's being less than expansive, von Schlippenbach reveals himself as an individual with an exploratory bent, reaching some accommodation with both the moment and the silence.

"Lhotse" is Piano Solo '77's longest piece, but again a seeming reluctance to take an expansive approach is evident. It makes for a listen both fascinating and compelling, as the pianist sticks doggedly to his instrument's conventional vocabulary, but seems restless working within the limits imposed. As it is, the walls of that basement studio clearly accommodated some enthralling music.