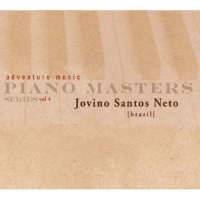 Adventure Music's Piano Masters series is all about balancing consistency and individuality. The consistency connects to the instrument(s) on hand—high-end Fazioli pianos—and the quality of the recordings. The individuality, obviously, comes with the artist whose hands grace the piano. So far, the work of Benjamin Taubkin, Philippe Baden Powell, and Weber Iago has come to light through separate volumes in this noteworthy series; now, it's Jovino Santos Neto's turn to find himself behind a Fazioli.

Neto, who is best known for his fifteen year stint with the great Hermeto Pascoal, delivers a program of twenty tracks and most of the material can be filed under one of two headings: "passing thoughts" or "solid songs." Nine of the tracks clock in under two-and-half minutes, and these pieces tend to come off like transitional episodes. Virtually all of these shorter numbers are credited to Neto and, while they aren't explicitly listed as on-the-spot improvisational musings, he does note that "free improvisations" are part of the program. The longer numbers—which fall in the three to six-plus minute range—seem to have greater structural integrity. This list includes classic songbook fare ("All The Things You Are" and "My Funny Valentine"), a Beatles favorite ("Blackbird") and engaging originals ("Hoping For The Day").

The artistic direction for this project falls somewhere in between what Powell and Iago did on their respective dates. Powell took a more melody-pure approach to music while Iago preferred to use harmony and rhythm as his twin muses, skirting around melodic focus without completely turning a blind eye to it. Neto's work nods to both approaches...even at the same time ("Amanha"). He can find the groove within a melody ("What Is This Thing Called Love") and melody within a groove ("Samba De Uma Nota So"), but he's also content to abandon melody altogether, choosing instead to focus on tension ("Semente"). This more exploratory approach is used sparingly, as Neto prefers to paint pictures that attract the ear. When he gives the expected nod to Pascoal ("Bebe"), for example, it comes with all of the bounce, beauty and joy that are expected.

Neto, perhaps more than any other artist in this series, captures the scope of possibility that can take place when the stars align between performer, instrument, recording engineer and room ambiance.