By DAN BILAWSKY
October 8, 2012
Sign in to view read count 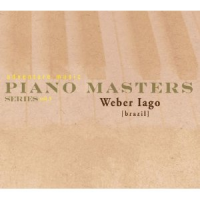 Clarity in sound and format link volumes two and three of Adventure Music's Piano Masters Series, but the artists showcased on these solo dates bear little resemblance to one another. Pianist Philippe Baden Powell, who was featured on Piano Masters Series, Volume 2 (Adventure Music, 2012), laid out a diverse piano portfolio filled with classic jazz fare ("Giant Steps") and nods to famous Brazilians (i.e. Caetano Veloso). Melody and rhythm powered his performances and a sense of relatively clear structural boundaries fenced in his work. Pianist Weber Iago, who moves into the spotlight now as the third artist featured in this series, isn't as easy to pin down.

Baden Powell and Iago share a love for rhythmic vivacity, but melody isn't Iago's muse. He can take a melodic motif and spin endless variations on and around it ("Stairway To Us"), spontaneously create appealing lines that are quickly embedded within steady streams ("True Colors") or tenderly dole out expressions of beauty with ease ("Merci Mon Frere"), but his work isn't built with singable suggestions. Harmony and rhythm are the needle and thread that help Iago hem his wonderful ideas.

Iago is credited as composer for all nine pieces on the program, but only five of the nine numbers are compositions in the truest sense of the word. The graceful "It Dawned on Me," rhythmically zestful "Happiness is a Choice" and open-minded "From I to Z" find Iago in fine form as he works through music that he put down on paper prior to walking into the studio. "True Colors" and "Stairway to Us," which mix tense flowing ideals with calmer thoughts, "Mirrors," which takes shapes around a memorable five note riff in the left hand, and "Carmela," which provides a calm conclusion to the album, were all created on the spot. The fact that all nine tunes blend together so well speaks to Iago's ability to blur the lines between the worlds of the written and improvised.

The music that Weber Iago makes on this solo recital tends to act as a slow burn on the ears. Records like this rarely get their due because they don't trade in on the idea of music-as- easily-digested-melodic-confection. Iago's work reveals more with time and rewards repeated listen.

True Colors; Stairway To Us; It Dawned On Me; Mirrors; Merci Mon Frere; Happiness Is A Choice; From I To Z; Praise; Carmela.