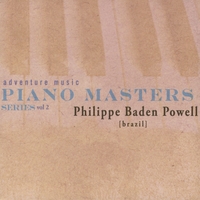 Philippe Baden Powell's first solo piano date (and second record as a leader) is the second volume in Adventure Music's Piano Masters Series. The label sought to realize "the dream of the intimate experience of solo piano music between artist and audience" by putting fine pianists in a room with a high-end Fazioli Concert Grand Piano and recording the results; but they do much more than that. By presenting artists like Powell, Benjamin Taubkin—who kicked the series off with his solo release in 2010—Jovino Santos Neto and Weber Iago (who have already recorded yet-to-be-released dates), the label is making a clear commitment to artists that are flying under the radar, yet deserve to be recognized.

Powell, the son of legendary Brazilian guitarist Baden Powell, covers tremendous ground on this program, which highlights his rhythmic acumen and clarity in expression. Originals worth savoring, songs from his famous father, jazz classics from Thelonious Monk ("Round About Midnight") and John Coltrane ("Giant Steps"), and chestnuts from Brazilian bigwigs like Caetano Veloso and Egberto Gismonti are all part of the package.

While Powell maintains consistency in touch and sound—avoiding the muddy, pedal-happy tendencies that plague so many piano records—he prefers diversity when it comes to stylistic direction. Sing-song suggestions come through on the album-opening vignette ("Prologue"), but it doesn't take long for Powell to roam into different territory. "Frevo Da Sorte" follows, beginning with scattered thoughts and darkness before arriving at a catchy, melodic destination, while a Chick Corea influence can be felt during "Consolacao." "Round About Midnight" and "Giant Steps" are theme-and-variations performances that give a nod to two American icons, but Powell's Brazilian roots shine through on the bossa-leaning "Sou Voce." The pianist occasionally moves into a dreamier, more ruminative arena ("Canto Triste" and "Ending"), but he never gets too sentimental or romantic.

At this point in his career, calling Powell a "master" may be a bit presumptuous, but he is a hell of a pianist who deserves wider recognition; hopefully, this record will bring it to him.