Piano in the Foreground

By RAUL D'GAMA ROSE
June 12, 2011
Sign in to view read count
The piano has been a much coveted instrument ever since its invention and never less so than within the 20th century avant-garde. As a central character in the narrative of music since 1900, the instrument has been hugely dominant. Its near infinite range of harmonics and rhythmic extrapolations have afforded musicians who write for or performed on it enriched composition and performance possibilities. It is no wonder then that most moderns have been so seduced by its dynamics that they have created major compositions around it, often heard in solitary splendor, but also with brass, winds and strings embellishment. Finding favor over the violin, the ebony and ivory became a celebration of body and soul for all who worshipped at the altar of the piano.

The Hat Hut label home has done much to forward avant-garde piano music. Its catalogue has recently been enhanced with two new and recordings and one reissue.

Galina Ustvoltskaya revelled in the symmetry of dissonance. At her composer's hand, the improbable was made probable and became real with dramatic intensity. Its effect on emotion and memory became indelible, like Erik Satie's work did, or that of Dimitri Shostakovich. The loud report of dynamic chord clusters, like those of Henry Cowell, also found favour in her music. Her Piano Sonatas 1—6 make a strong case for her importance—in the music of form—among musicians of her generation. Ustvoltskaya's music reveals a wide array of influences, both philosophical and visual. For instance, the logic of mathematical imagination is brightened by the architectural nature of "Sonata No. 2." Its deliberate schematics are highlighted by vivid shapes and spatial geometry and are a tribute to pure imagination.

Playing in a wonderstruck state of mind, pianist Marianne Schroeder conveys the absolute right mix of exactitude and airiness in coming to terms with this music's hidden, special character. Similarly, the diverging counterpoint of "Sonata No.4" is explored with grace and technique, making the composition a rare monument to emotion. The abject tenderness opposes the surreptitious given melody. This is dramatically different from the forthright hammering in the upper register, followed by the sinister grumble in the lower register, making a musical case for the precision of militaristic vistas in "Sonata No. 5." This dramaturgy of the precious music continues until the end of "Sonata No. 6" too. 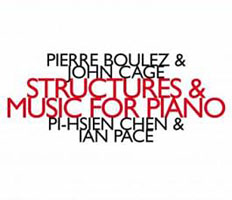 The beauty of imprecision is the central to the music of John Cage. Even as his works—especially on this album—come complete with prepared piano, the fascinating surprise of chance allows notes and whole tonal palettes to fall almost accidentally. Yet, whether in consonance, or the random order of a stuttering phrase or whole line, the ordered anarchy of the music is elemental.

On "Music for Piano," because the composer specifies the manipulation of prepared piano, and the manipulation of its dampers and strings, the music manages to escape the confines of form in the conventional sense. Thus, in each of the compositions, especially in "No. 47," the two pianists, PI-Hsien Chen and Ian Pace, expand the grammar of the composition, and therefore the piano-as-instrument, by punctuating the arrhythmia of the harmony with percussive explosions of strings being struck or plucked, as well as hammering families of strings like a ferocious kick on a bass drum. The result is superbly dramatic.

Pierre Boulez's music sweeps like a heliographic swirl that fills the air with the fire of a radical intellect, one who also wears his romantic nature with unabashed grace and power. The composer's eternal search for pure harmonic proportions continues throughout his work represented on this album. Also known as an Apollonian "musique pure," the sublime placement of whole schematics of tones without the subjectivity of personality—especially that of the composer—makes the compositions resound with cathartic power.

The "Structures," both "Premier Livre" and "Deuxieme Livre," are seminal examples of the characteristic French search for "clarté" and "raison," both of which flavor Boulez's work.

Of all the composers' works under review here, the music of Luc Ferrari most represents music that is visual—even cinematic—in character and scope. In fact, the music is almost completely subsumed by what appears to be an inimitable dance where characters pirouette like dervishes. There is also a gamine quality to the music. This not only makes the music playful and full of surprise, but is also touching on primeval in character. This does not mean that the music is sinister or filled with the merciless fearfulness of the unknown, but it certainly embodies such a free spirit, one that could only exist in an interminable state of genteel wildness.

"Conversation Intime" features the exquisite partnership of the celebrated Japanese pianist, Satoko Inoue, who was one of the most favored interpreters of the work of Ferrari (who was present at the time of this recording), and the percussionist, Toshiyuki Matsukura. This duo provides a stellar interpretation of a piece that is challenging and contradictory in verse and character. The intimate partnership continues through a longer piece, "Cellule 75," which brings the pianist face to face with a percussionist who turns his role into that of a force of nature, as he conjures up a host of earthly images through magnetic tape and percussion of all sorts.