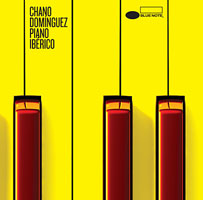 Spanish pianist Chano Dominguez keeps on with his unique blending of flamenco and jazz with Piano Ibérico (> (Iberian Piano), an exquisite homage to some of Spain's most influential composers, including Isaac Albéniz, Manuel de Falla, Enrique Granados, and Frederic Mompou. Along with three new compositions of his own, Dominguez creates his own interpretations of these four piano composers. "They are the inspirers of this work and, to me, the first flamenco pianists because they were able to take the soul of popular music and stamp all their knowledge," he explains.

After his recent collaborations with Wynton Marsalis and Paquito D'Rivera, Dominguez takes on the challenge of updating the music of some of his deepest and most intimate influences. But Dominguez not only takes their music and introduces it to a different, perhaps younger audience; he also stamps his broad music knowledge on them, creating a music chain that will be picked up by up-and-coming musicians.

Dominguez is backed by a small yet passionate lineup, which sets the flamenco mood and enriches the overall sound with vocals and different percussion. Flamenco, jazz, ballads, tangos, and bulerias all form part of a record that reaffirms Dominguez's restlessness. Once again, he shows his virtuoso technique and incredible sense of timing, merging classical compositions with flamenco and jazz improvisation.