By EDWARD BLANCO
October 1, 2011
Sign in to view read count 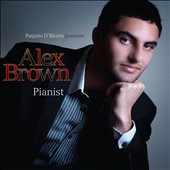 With a little help from Cuban-born saxophonist Paquito D'Rivera the jazz world heralds the entrance of 22 year-old Alex Brown, capturing but a glimpse of his talents on a monster recording debut simply entitled Pianist. It was actually D'Rivera's bassist, Oscar Stagnaro,who began to gig with pianist around the Boston area, ultimately introducing Brown to D'Rivera, and the rest is history. Taken with Brown's skills on the instrument and his understanding of Latin music beyond Afro-Cuban rhythms, D'Rivera took him under his wing and presents the pianist's solo flight with this album.

Never in awe of his mentor—always respectful and very expressive in his play—Brown emerges from the shadows with a clear message that he has, indeed, arrived. Though he shares the studio with seven veteran professionals, Brown demonstrates a commanding presence and rarely relinquishes it. Recorded in a two-day date in 2010, Brown presents eight blistering originals and throws in the Pixinguinha Brazilian choro cover "Lamentos," as well as Cole Porter's classic "Just One of Those Things," to cap what is truly an exciting selection of music.

Featuring hollow marimba sounds from Warren Wolf, the percussive "Prologue" opens the set in hard-driving fashion, presenting changing grooves that do not quite develop into a definable melody, but remain interesting nevertheless. "Warm Blooded" is a soft-toned piece with rhythms drawn from an unnamed rap song that Brown composed as a school assignment. There is absolutely no resemblance to rap here, however, which was the intent; instead, the piece is warm-natured and highlights flugelhornist Vivek Patel.

Producer D'Rivera appears on three pieces, blowing his alto saxophone on the high-octane, Latin-tinged "The Wrong Jacket"—the album's defining piece featuring, percussionist Pedro Martinez—as he lends his instrument and vocal accompaniment against the crashing cymbal accents from drummer Eric Doob. D'Rivera, Martinez and Wolf come out swinging on Brown's "Buleria," a fiery Spanish flamenco reinterpretation that matches the energy of "The Wrong Jacket." D'Rivera and the pianist are simply superb on the spicy "Lamentos," as D'Rivera wields his high-pitch clarinet to better bring out the Brazilian ragtime flavor of the piece.

Composed and dedicated to jazz icon and pianist Chick Corea, "Elektric" provides the kind of charge that allows Brown to showcase a measure of his piano chops. With a melody containing a strong jazz influence, "Leaving" is another Latin piece penned using the danzon rhythms from Cuba its the foundation. Brown is especially expressive on "Waltz" and "Just One of Those Things," the pianist appearing a trio format setting with Doob and bassist Ben Williams

Brown is indeed fortunate that D'Rivera recognized the potential of his talents and produced this stunning debut.