Julie London told Life Magazine in 1957 that she had "only a thimbleful of a voice, and I have to use it close to the microphone. But it is a kind of over-smoked voice, and it automatically sounds intimate." Her vocal style has been described as being sultry, sexy, "come-hither", intimate, breathy, warm, smoky, haunting, husky, sullen, sad, suggestive and seductive. The majority of her album covers were graced by sultry, yet sophisticated pictures of Julie - the cover of her first album, Julie is Her Name, being, at the time, thought of as so sexy that it was described as "...generating enough voltage to light up a theater marquee"

Los Angeles singer Lyn Stanley frequently appears in L.A. with a big band of Swing Era veterans. However, in the recording we are sampling today, her accompanists are six of Southern California’s busiest veteran players of modern jazz. Called for this album, the Jazz Mavericks, they are guitarist John Chiodoni, pianists Otmaro Ruiz and Mike Lang, ...
read more

Allegra Levy: Looking at the Moon

Oscar nominated singer-songwriter Lucinda Belle isn't the first to do what she does, but she may be among the most eclectic; the vocalist/harpist keeps tradition alive by feeding it with myriad influences. Though her vocal style and choice of instrumentation often suggest jazz, she reaches well beyond the idiom while staying true to its roots. Her ... 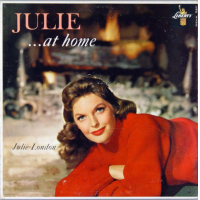 Recently over a weekend, I posted a few video clips of Julie London singing and appearing on the TV game show What's My Line? Many of you unfamiliar with London wrote to me fully understanding why I would write that she's my favorite female vocalist of the 1950s and '60s. As I noted, London's voice is the ...
read more

Anat Cohen/Davidson College Jazz Ensemble & Jazz Combo Davidson College / Duke Family Performance HallDavidson, NC April 21, 2017 We've known for a long time that Anat Cohen can electrify audiences whenever she picks up her clarinet and plays. After her recent residency at Davidson College, we can now proclaim that ...

It's no secret that three of my favorite female vocalists are Julie London, Sarah Vaughan and Chris Connor. Yesterday, I was listening to Chris with Stan Kenton in the spring of 1953 and Sy Oliver in December of that year. Prior to Kenton, Chris in 1952 recorded as a solo singer with Jerry Wald and then ...
read more