Creator and host of the original "Tonight" show. Authored 52 published books, including: the 1998 publications of "Murder in Hawaii", "Die Laughing" and "Dumbth...(and 101 Ways to Reason Better and Improve Your Mind)"; the 1996 publication "Wake Up to Murder & But Seriously"; the 1995 publication of "The Bug and the Slug in the Rug"; "The Man Who Turned Back the Clock" and "Murder on the Atlantic"; 1994's "Reflections"; and 1993's "The Murder Game", "More Steve Allen on the Bible, Religion & Morality, Book Two", and "Make 'em Laugh". Steve Allen’s 100 Song Lyrics are to be released in 1999. Allen starred on Broadway in "The Pink Elephant"; Starred in motion pictures, most notably in the title role of Universal's "The Benny Goodman Story" 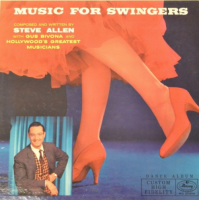 Arcuiso “Gus" Bivona was never a household-name clarinetist like Artie Shaw or Buddy DeFranco, but during the big band era and throughout the 1950s, he was one of the finest and most relaxed swing studio clarinetists in the business. He also was a rock-solid alto saxophonist. Bivona came up in the late 1930s in Will Hudson's ...
read more

The Ballard Jazz Festival, Seattle's most anticipated and community oriented jazz event, will take place May 17-20, and will headline legendary saxophonist, Chico Freeman. Dubbed three decades ago as one of the “young lions" of jazz for his participation in recordings with other “stars to be," such as Wynton Marsalis, Kevin Eubanks, and Paquito D'Rivera, Freeman's ...
read more

Mort Weiss' E-book, "Sex And The Jazz Musician - The Hollywood Years And Beyond," Now Available

New E-Book Translates the Octogenarian Clarinetist’s Mort Report Columns from All About Jazz into an Autobiographic Series of Vignettes Complimented with Music and Video Sex and the Jazz Musician—The Hollywood Years and Beyond, an intriguing glimpse into the life and times of “the world's greatest unemployed jazz clarinetist," 80-year old Mort Weiss, is now available as ...
read more

A Legend In Concert: Peggy King And The All-Star Jazz Trio At Sellersville Theater On February 1, 2015

Along with Tony Bennett, the legendary songstress Peggy King is one of the few, certifiable stars of stage, screen, radio television and nightclubs still performing today. Peggy King will appear in concert with The All-Star Jazz Trio on Sunday, February 1 for a 2:00 p.m. matinee appearance at the historic Sellersville Theater in Sellersville, PA. Tickets ...
read more