Drummer, composer, arranger and producer George Schuller, a native of New York City, moved to Boston in 1967 where he was raised and educated, and later received a Bachelor's Degree in Jazz Performance at the New England Conservatory of Music in 1982.

In 1984, he co-founded the twelve-piece ensemble Orange Then Blue recording several acclaimed albums, including the 1999 release, Hold The Elevator: Live in Europe and Other Haunts (GM Recordings). Orange Then Blue toured extensively throughout the U.S., Canada, Middle East and Europe during the early to mid-90s.

It's a pretty sure bet that appraising any album whose title is also a palindrome isn't going to be a stroll in the park, even more so when the orchestra in question is the Jazz Composers Alliance (rule of thumb: the longer the name, the more abstruse the music) and the instrumentation includes voice, marimba, EWI, ...

One day in June 2016, guitarist Michael Musillami woke up with a massive headache. Tests soon revealed that he had a brain hemorrhage and also an unrelated brain tumour. He slowly recovered from his illnesses and is now in good health. Life Anthem is his musical testament to his ordeal, realized in this recording by his ...

Guitarist Michael Musillami has been making music with his MM Trio since 2002, when he first teamed up with bassist Joe Fonda and drummer George Schuller for Beijing (Playscape, 2003). Subsequent albums, all for the Playscape label Musillami founded and continues to run, have sometimes involved just the trio, while others have brought in guests--standout players ...

Meet Adam Schneit: Saxophonist, clarinetist, and composer Adam Schneit grew up in Portland, Maine, and has made Brooklyn his home since 2006. He earned a Master's degree in Jazz Performance from the New England Conservatory of Music, where he studied with esteemed artists including Steve Lacy and Bob Brookmeyer. Since moving to New York, ... 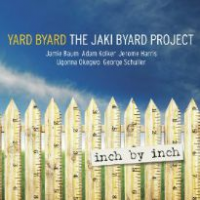 The Jaki Byard Project, Inch By Inch, Yard Byard (GM Recordings) An album in tribute to a prodigious pianist—without a pianist; it must have seemed a good idea when flutist Jamie Baum conceived it. And it was. Ms. Baum, drummer George Schuller and guitarist Jerome Harris studied with Byard at the New England Conservatory. He died ...
read more

Trumpeter/vocalist Bob Merrill has had an amazingly varied career in and around music—mentored by his late father-in-law Joe Bushkin, Jaki Byard, and Red Rodney; starting and operating Hip Pocket Recording Studios in jny: New York City; and recording as a leader himself. Cheerin’ Up the Universe, his new CD and fourth to date, is being released ...
read more