Zappa. A glimpse.The composition was entering its fifth mood, a diabolical, gleeful, lurching rhythm, led by deep-plowed violin. The song was “Revised Music for Violin and Low Budget Orchestra," it was written for Jean-Luc Ponty by Frank Zappa. A new instrument dawned into my framework as that composition wheezed and moaned and ranted and spun—that classic, demure, genteel pansy of an instrument had been plucked from its staid Old European stand and forged into a complex, eloquent and ...

Part 1 | Part 2 There are two ways a musician can make a significant impact on jazz. One is to mobilize virtuosity and knowledge to push the current boundaries of the music. There are a number who fall in this category, but unassailable examples are Louis Armstrong, Art Tatum and Charlie Parker. The other way to make an impact is to bring an alternative approach powerful enough to challenge the entire pre-existing musical paradigm. Ornette Coleman was ...

The mere act of re-releasing a 1960 Frank Sinatra album speaks to the fact that his name still creates ripples when tossed into the cultural pond; still has the power to inspire a reaction when other other vocal stars of yore have receded into distant memory. An ocean of ink has been spilled in portraits and musical criticism of the “Chairman of the Board," some of it merely respectful, most adulatory. Long ago, the rough, mafia-inflected edges were smoothed out ... 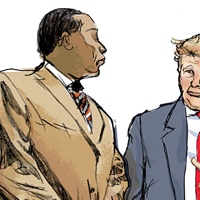 Having observed--from a safe distance--president Donald Trump's pathetic and propaganda-driven response to the coronavirus pandemic, the nation's collapsing economy, the horrific death of George Floyd at the hands of Minneapolis police and the coast-to-coast protests that have followed, your intrepid reporter was moved to present (as Fox News would assert) a more “fair and balanced" narrative and safeguard it for posterity in a series he calls “The Trump Files." The reportage was begun in mid-April and should, if all goes ...

"There's a little white cat out here who's going to eat you up." —Charlie Parker (to Miles Davis) Chet Baker and Miles Davis. Two trumpet players born three years apart. Both unusually handsome and slight of build. Both lacking, as trumpeters, the qualities most often associated with those brass alphas of the jazz world--power, speed, stratospheric range. Both associated, in their early years, with Charlie Parker. Both boasting incredibly prolific recording careers, with dozens of leader dates ...

Blue Note moves in mysterious ways. It seems like only a few months ago that the storied jazz label announced its Tone Poet vinyl series, because, well, it was only a few months ago, and here they are with yet another entry in the vinyl reissue game: the Blue Note 80th Anniversary Series. Like the Tone Poet sequence, the 80th Anniversary releases will be on 180 gram vinyl and mastered from analog sources “where possible." So far, so much better ...

Several films about jazz depict troubled and vice-ridden musicians, such as Charlie Parker, in Bird, and Chet Baker, in Born to be Blue. I walked out of the latter after twenty minutes of excessive obscenity, graphic vice, and general disgust. These films reinforce the idea that jazz is associated with illegal activities, illicit sex, and generally flawed character. The Miles Davies film, Miles Ahead, gives the same picture. I will not watch that movie, since I already know enough about ...