The Waitiki 7: New Sounds Of Exotica 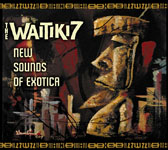 The Waitiki 7New Sounds Of ExoticaPass Out Records2010 As kitsch as a Jeff Koons Valentine card, and as camp as a Liberace Christmas TV special, exotica first flourished, primarily in the US, between the mid-1950s and the early 1960s. As the Pacific returned to peace after the second world war, and as the US economy entered a newly prosperous, consumer-driven age, increasing numbers of Americans began taking long haul vacations, first ...