Pianist Yoko Miwa was born in Japan, but she has set up shop in Boston, where she teaches at Berklee College of Music. She has also—beginning in 2003 with Fadeless Flower (Polystar Records)—previously released seven CDs. The superb Keep Talkin' brings that number of recorded offerings from Miwa to eight. The music of Keep Talkin' says that Miwa has fully embraced an American state of mind, beginning with the title tune, a Miwa original that sounds like something ... 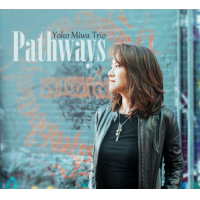 Yoko Miwa is a pianist operating in the Boston area whose stylistic reach touches on funky gospel, bluesy bebop and dramatic pomp. She and her long time trio jump out nicely from the first track, the surging gospel rhythms of Marc Johnson's “Log O'Rhythm," drummer Scott Goulding providing a solid shuffle foundation to Miwa's pounding. They also have fun cascading up and down on another Johnson tune, “After All" later on the disc.Miwa's original melodies on this disc ...

It sounds like Boston-based pianist Yoko Miwa gathered her trio mates--bassist Will Slater and drummer Scott Goulding--outside the studio door and said: “Let's have some fun!" The result is Pathways, her seventh release as a leader, in a discography that includes Fadeless Flower (Self Produced, 2004), Canopy Of Stars (Self Produced, 2007, and Live At Sculler's Jazz Club (Self Produced, 2011). If ever there was a studio recording with the freshness and vitality of a live set, this ...