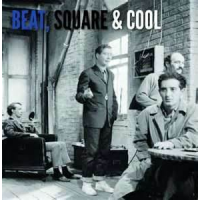 Again presenting eight film scores spread across five discs, packaged in a gorgeous box and enclosed with a beautifully illustrated and comprehensively notated booklet, the Moochin' About staff (who are also the force behind the excellent British magazine Jazzwise) have returned with their second installment of noir and near-noir jazz movie music. As with their previous five disc volume, Film Noir, Beat, Square, and Cool anthologizes dark, moody “crimejazz" film scores coming from composers from both outside and within the ...