Hard bop created a comfortable setting for a suite of great blues-influenced guitar players who led the way toward soul jazz. Several of these players were from the mid-west -Wes Montgomery from Indianapolis, Grant Green from St. Louis and Detroit's Kenny Burrell. The next three hours of Jazz at 100 will present music from the 1960s that combined the heavy beat and blues-influenced phrasing of R&B with the harmonic discoveries of bebop to create a style loosely called Soul Jazz, ...

In this podcast conversation, record producer Zev Feldman explains how he got started in the jazz business as a young man (in his early 20s) and came up through the ranks of sales ("schlepping a bag of CDs"), merchandising, marketing, distribution -all of the pieces of the business as it existed at the end of the last century. Over time he came to settle comfortably in an area of the jazzosphere that focuses on locating, unearthing and releasing previously unknown ... 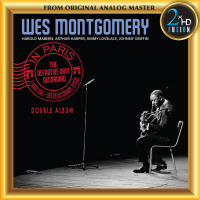 2018 has been a good year for jazz music in hi-res audio formats. ECM, Songlines, Intakt, ACT Music, Firehouse 12, Foné, Mack Avenue, TRPTK, and other independent labels released newly-recorded and recent catalog albums in high resolution through download vendors, Bandcamp, and the labels' own websites. One US music vendor lists more than 300 jazz titles that became available as hi-res downloads in 2018. High resolution audio has become increasingly affordable and widespread, with hi-res DACs included in portable and ...

With Resonance Records' release of Wes Montgomery in Paris 1965, we receive not only the first official production of this classic concert to provide royalties to the Montgomery family, but also a gloriously remastered portrait of a seminal jazz contributor during a pivotal period of artistic history. Lovingly appointed with extensive commentary and an abundance of historic photos, the two-disc album documents the astounding concert by Wes Montgomery in Paris, which featured Montgomery backed by an astute working ...

Zev Feldman has called Resonance Records, “The house Bill Evans and Wes Montgomery built." That may be hyperbolic, but the label has liberated from obscurity many previously unreleased or rarely heard performances by the two artists. Regarding Montgomery, Resonance has released four Montgomery recordings to date: Echoes of Indiana Avenue (Resonance, 2012); In The Beginning (Resonance, 2015); One Night in Indy (Resonance, 2016); and Smokin' in Seattle: Live At the Penthouse 1966 (Resonance, 2017). The label now adds a diamond ... 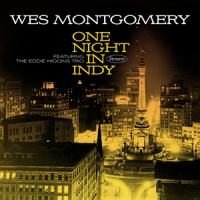 In the Resonance Wes Montgomery catalog, One Night in Indy: Featuring the Eddie Higgins Trio (2016) falls in between In The Beginning (Resonance, 2015) and Smokin' in Seattle: Live At the Penthouse 1966 (Resonance, 2017). It is documentation of Montgomery, appearing with the Eddie Higgins Trio at the Indianapolis Jazz Club, January 18, 1959. These performances, not previously released, fall chronologically between In The Beginning and Wes Montgomery: Beginnings (Blue Note, 1959). the Wes Montgomery Trio (Riverside, 1959); The Incredible ...