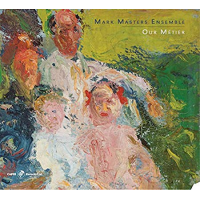 There are a lot of fine composers writing for large jazz ensembles today, so many that some names can get lost in the shuffle. Mark Masters is a case in point. You don'r hear about him often, possibly because many of his recordings feature his ensembles playing the music of other composers like trombonist Grachan Moncur III, baritone saxophonist Gerry Mulligan and tenor saxophonist Dewey Redman. However the music on Our Metier all comes from Masters' own pen and it ...

Mark Masters, an extraordinarily talented and perhaps undersung arranger of large ensembles jazz, has spent a good deal of artistic energy on crafting recordings that explore other people's compositions. His Capri Records output includes The Clifford Brown Project (2003), celebrating the sounds of the too-soon-gone trumpet legend; Porgy and Bess (2005), from the George Gershwin songbook; One Day With Lee (2004), a celebration of alto saxophonist Lee Konitz; Farewell Walter Dewey Redman (2008), a nod to another great sax man; ... 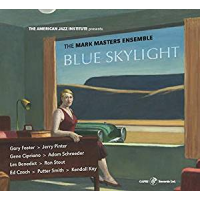 California-based composer / arranger Mark Masters, who has already recorded salutes to Clifford Brown, Jimmy Knepper, Dewey Redman, Steely Dan, the Gershwin brothers and even the Duke Ellington saxophone section, directs his attention and considerable talents this time around to the music of a pair of legendary jazz trend-setters who were in many respects polar opposites: bassist Charles Mingus and saxophonist Gerry Mulligan. To amplify his purpose, Masters made two pivotal decisions, each of which serves to ...

Mark Masters has made his name in the banderleader/arranger arena fronting The Mark Master Ensemble, in various forms, with personal tributes to past masters: saxophonist Dewey Redman, Duke Ellington, trumpeter Clifford Brown, and present master, alto saxophonist Lee Konitz, who played as the featured artist on One Day With Lee (Capri Records (2000). These are all top notch recordings, affording Masters the opportunity to craft his own beguiling interpretations of the artistries of recognized giants of jazz. With ... 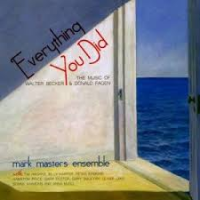 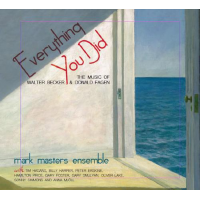 Rock band Steely Dan released Pretzel Logic (ABC) in 1974. The album was big, one its most successful. But with younger audiences unfamiliar with jazz, the disc surely must have caused some confusion, along the lines of: “What in the world is this 'East St. Louis Toodle-oo?' And what are they talking about with 'Parker's Band?'" The former tune, a three-minute instrumental, closed out side one and it was, of course, from the pen of composer/bandleader Duke Ellington. The latter, ...

Bandleader/arranger Mark Masters has recorded a set of Steely Dan tunes with a big band, which can be set on the shelf next to his celebrated albums dedicated to the music of George Gershwin, Duke Ellington and Dewey Redman. A Dan jazz album makes sense. It's clear from the rock band's '70s albums that Donald Fagen and Walter Becker warmly loved jazz: the intro to their hit “Rikki Don't Lose That Number" is lifted directly from pianist Horace Silver's “Song ...