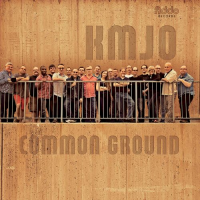 KMJO is shorthand for the Kirk MacDonald Jazz Orchestra, and Common Ground is the third recording by the splendid Toronto-based group, following the well-received Deep Shadows (2011) and Family Suite for Large Ensemble (2012). This time around, the orchestra performs compositions by MacDonald arranged by one of Canada's premier co-pilots, Joe Sullivan. The KMJO, MacDonald asserts, is comprised of world-class musicians, an assurance that is impressively confirmed on every number, not only by the ensemble's unerring consonance ... 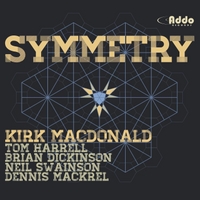 It is no secret that Canada is the home of some of the finest jazz musicins in the world and Toronto-based saxophonist Kirk MacDonald, a long-time active educator, is one of those established stars and veteran of the Canadian jazz scene. He has appeared on over fifty albums as both a sideman and leader and Symmetry, his eleventh album as leader, which had been previously unveiled in Canada only, is now available in the U.S. and internationally for audiences everywhere ...

Following two splendid albums as leader of his own big band (Deep Shadows, Family Suite for Large Jazz Orchestra), Toronto-based saxophonist / educator Kirk MacDonald has returned to a small-group format for Symmetry, the thirteenth recording on which his name has been listed atop the marquee. In this case, however, any member of MacDonald's quintet could have easily laid claim to the honor, as every one is an all-star in his own right, from the renowned trumpeter Tom Harrell, who ... 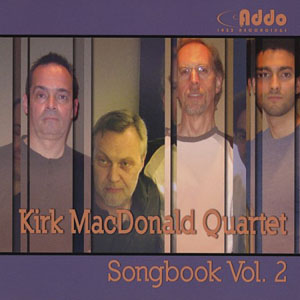 Saxophonist Kirk MacDonald--an exemplary player, composer, band leader and educator--has established himself as one of Canada's premier jazz musicians. His compositions are geared to mainstream jazz, but he uses several tributaries to blood them and generate nuggets of energy and rumination. MacDonald's integrity as a player is defined by his versatility. He can forge ahead and find unexpected nooks of delight that tantalize, or he can go deep into the fabric of a ballad and spin a ... 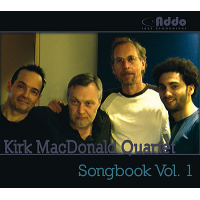 Kirk MacDonald first recorded when he was 13. Since that time he has gone on to establish his reputation as one of Canada's finest saxophone players. Over the years, Macdonald has played as a sideman and has led his own bands which have varied in size, the biggest being the 19-piece Kirk MacDonald Jazz Orchestra. The wide angle of the situations he plays in has given him a perspective that is both perspicacious and judicious, opening a field that he ...

Kirk MacDonald was raised in Nova Scotia and now resides in Toronto. On this date, his third as a leader, he has assembled a fine group of Canadian jazz stars that includes Lorne Lofsky (guitar), Neil Swainson (bass) and Jerry Fuller (drums). They perform a program split between MacDonald originals and some well-known standards. Kirk is a fiery, fleet improviser whose hard tenor tone is nicely balanced by Lofsky’s restrained solos and mellow comping. MacDonald’s adventurous spirit is fully displayed ...