Following his debut as a leader on, Wynton Kelly: New Faces -New Sounds (Blue Note, 1951), pianist Kelly surfaced again some seven years later, this time on Riverside Records, with the simply titled Piano. The length of time between leader recordings is a testament to the pianist's value in a supporting role for artists like Dinah Washington (with whom he recorded almost exclusively between 1952 and 1955) Lester Young, and Dizzy Gillespie. During this same period Kelly contributed to several ... 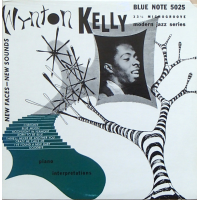 The jazz name Wynton Kelly is typically associated with other artists' endeavors, such as John Coltrane's Giant Steps (Atlantic, 1959), Miles Davis' Kind of Blue (Columbia, 1959) or Wes Montgomery's Smokin' at the Half Note (Verve, 1965), just to mention three landmark recordings. While he always seemed best cast in supporting roles, Kelly did have a highly respectable solo career, and while it was neither as productive, nor considered as critically important as his sideman roles, it is still worthy ...

Wynton Kelly Trio with Wes Montgomery: Smokin' at the Half Note 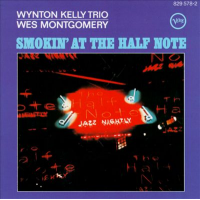 This remastered, expanded edition of the classic 1965 Wes Montgomery-Wynton Kelly Trio session is essentially an economy-priced version of the import The Complete Live at the Half Note. If you have the original Smokin' at the Half Note and are not a Wes completist intent on picking up the six extra tunes (expendable, with the exception of “Impressions"), the audio quality of this version is not sufficiently superior, in my opinion, to justify purchase. Still, it's reassuring to see that ...

Pianist Wynton Kelly, one of the most respected musicians of his time (1950's - 60's), was better known as a complementary player than band leader. He fit in with countless musical situations (singers, big bands, Coltrane, you name it), and almost anything he played on is worth hearing if only for him. He never meant to upstage anyone, but his ensemble playing was so interesting and full of swing the listener is inevitably drawn to him. His soloing was equally ...

It’s tempting to play the “Six Degrees of Separation” game with Miles Davis and see if you can actually link every jazz musician back to him. This is due to the fact that Miles recorded quite a few classic albums, but was also responsible for fostering talented artists in his band that went on to record exceptional sessions of their own. Maiden Voyage and A Love Supreme come to mind.

Although not an adventurous as Hancock or Coltrane, Wynton Kelly ...