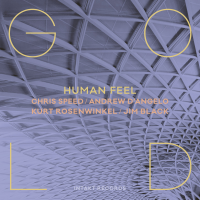 The band's appellation might be Human Feel, but after over 30 years of recording and performing together, maybe the quartet of saxophonists Andrew D'Angelo and Chris Speed, guitarist Kurt Rosenwinkel and drummer Jim Black should change their name to 'Super Hero Feel.' Just like a comic book franchise, when this quartet reconvenes, there is going to be some turbulence before triumph. The quartet's coming together this time is after 12 years without releasing a full-length album. The wait was certainly ...

Reunion records, now de rigueur in the rock and pop world, are rarer in the jazz realm. That fact makes Galore, the first album in a decade from the formerly defunct Human Feel, all the more important.

Human Feel was founded in Boston in 1987 by drummer Jim Black and saxophonists Andrew D'Angelo and Chris Speed. Guitarist Kurt Rosenwinkel joined in 1990 before the group headed to New York. By 1996, the band was absorbed into the Downtown ...