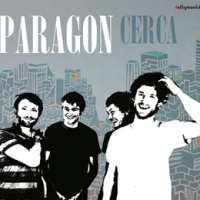 The art of conversation is surely dying. Too many people prepared to shout out the first thought that comes into their empty head, or repeat some banal corporate half-truth intended to drown out dissenting views. Self-importance, simple bad manners and selfishness rule the world with little space to reflect on or listen to what others have to say. In jazz though things can be different--take Anglo-German collaboration Paragon for example -they describe their music as ..."the sound of four people ...

It's been a decade since Anglo-German quartet Paragon formed. Cerca, recorded on an unspecified two days in Cologne, is the band's third release. The sax and Rhodes frontline, backed up by Matthias Nowak's bass and Jon Scott's drums, creates an elegant repertoire of tunes that draws on influences as diverse as '60s spiritual jazz and hip-hop grooves. Although the band's been around for ten years, Paragon's members can still be classed as part of the younger generation of ...