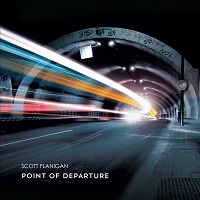 In an era where it's relatively easy to self-produce an album, Northern Irish pianist Scott Flanigan has taken his time with his debut effort. Now in his early thirties, Flanigan has been a mainstay of the small but flourishing jazz scene in Belfast and beyond for over a decade, collaborating with Linley Hamilton, David Lyttle and Mark McKnight, not to mention the likes of Van Morrison and Jean Toussaint. It's been a patient apprenticeship that has paid dividends, for Flanigan's ...