Bob Florence: The Man Behind the Music / The Stage Door (Often) Swings

The news arrived like an errant and unwelcome thunderbolt. Bob Florence had died on May 15, only five days before his seventy-sixth birthday. After the initial shock had worn off the question became, how does one process and evaluate such a distressing occurrence? How can one summarize in mere words so extraordinary a life? The answer is, one can't, even though the broad outline is well-known. Composer, arranger, pianist, bandleader, educator, Grammy and two-time Emmy Award winner, leader on almost ... 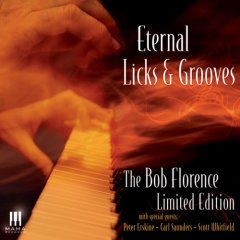 In a world of unrestrained hyperbole, where competent athletes are superstars and slim, attractive women supermodels, words like awesome, spectacular, phenomenal, superlative and breathtaking are too often over-used and undeserved. But not in this case. On Eternal Licks and Grooves, the Bob Florence Limited Edition is awesome, its soloists spectacular, guest artists Carl Saunders, Scott Whitfield and Peter Erskine phenomenal, Florence's piano playing superlative, his compositions and arrangements breathtaking.

Florence, who recently turned seventy-five, has recorded more than a dozen ...

Bob Florence and the Limited Edition: Bigger and Better Than Ever

The Bob Florence Limited Edition appeared at the Jazz Bakery in Culver City, California on big band night, Monday evening, October 25, 2004. Although the venue is not ideal for listening to big bands (its small size causes some loud passages to be rather muddy and indistinct), Florence's arranging, and the band's excellence, make them worth the experience in virtually any environment. Both brass and reed sections include some of the very best in the business, while the band has ...

The personnel roster for Bob Florence's big band does not experience much in the way of change over the years. His musicians are loyal and true. While I'm sure that solid personal relationships, geographical considerations, and other convenient reasons contribute to this stability, we all know that business is business. Especially in Los Angeles. Commitments come in all shapes and sizes. So, why have Florence's band members remained loyal for over twenty years like this?

Whenever master chef Bob Florence sets foot in the kitchen to slice and dice a new album, the listener can be sure that Whatever Bubbles Up will be as tantalizing and tasty as it is nourishing. Florence has been doing this sort of thing for more than four decades and knows how to put together a musical banquet that's guaranteed to please almost everyone's palate.

The entr'es on Florence's latest spread include five of his own singular compositions, two ('Chelsea ...

Summit Records is steadily building a reputation as a solid big band label, with notable recent releases from the Jazz Orchestra of the Delta , the Mike Vax Big Band , and the Les DeMerle Band . Whatever Bubbles Up showcases Grammy-Award Winning composer/arranger Bob Florence leading his big band, Limited Edition. Limited Edition is high on high brass. The repertoire is Florence's own with the exception of a beautifully rendered “Chelsea Bridge."

Bob Florence: Another Side

As a follow–up to his Grammy Award–winning big–band album, Serendipity 18, Bob Florence has chosen to record a solo piano album, and one’s response to it will depend largely on his / her musical preferences. This is no whim; it’s something Florence has wanted to do for a long time. He’s been studying and playing piano since he was four years old and gave his first classical recital at age seven. Florence’s big–band compositions and arrangements always lean heavily on ...