Ethnic Heritage Ensemble Center for New Music San Francisco, CA February 15, 2016 San Francisco's Tenderloin District is a down-and-out area which wags have christened “Twitterloin," (owing to the proximity of Twitter and other tax companies given tax subsidies to erect their palatial edifices in this culturally diverse neighborhood). And the Center for New Music, on Taylor Street, is a gem in its heart. While the arrival of the tech industry, and ... 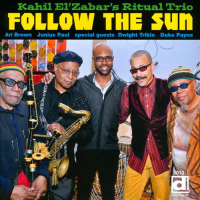 It is safe to state that the percussionist Kahil El'Zabar has never made a mediocre or a mundane album and Follow the Sun is no exception. On this intriguing and provocative disc El'Zabar leads his group through five originals and four covers that he interprets with his signature, fluid touch.Oscar Hammerstein II's heartsick standard “Softly As In A Morning Sunrise" gets a raw yet sophisticated makeover as El'Zabar and bassist Junius Paul lay down rumbling, intricate vamps. Over ... 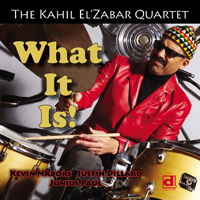 Since the early 1980s percussionist Kahil El'Zabar has led numerous dates as a leader, with much of his work issued by Chicago's Delmark Records. Some of his most impressive efforts for the label have featured collaborations with renowned artists, including New Thing-era luminaries such as Kalaparush Maurice McIntyre, Pharoah Sanders and Archie Shepp, as well as peers like Ernest Dawkins, David Murray and the late Billy Bang. What It Is! covers relatively new territory though, with the AACM veteran serving ... 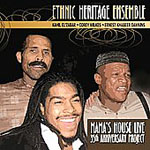 Kahil El'Zabar, a product of Chicago's South Side African-American community, is a true musical renaissance man. By trade, a percussionist who is fluent on conventional Western drums, he has mastered the esoteric and exotic instruments of his ancestors as well. He is a member of Chicago's famed AACM, has played with Dizzy Gillespie and Stevie Wonder, scored for film, arranged for the theater and taught at the university level. Along with the Ethnic Heritage Ensemble, his Ritual ...

Ooh! is the artistic conception of veteran percussionist Kahil El'Zabar and an acronym for Operative Oracles for Humanity. To jumpstart his newly founded creative endeavor, the famed Chicago improviser has released Ooh! Live, a recording of his Ritual Trio from a 2000 concert at The Hot House in Chicago. El'Zabar's fellow oracles for this date were the late bassist Malachi Favors, legendary Chicago musician Ari Brown--perhaps best known as a saxophonist but featured here mainly on piano--and special guest Pharoah ... 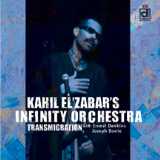 Kahil El'Zabar is a man of many inventions. His music has a pure passion that transcends the mundane. He lifts compositions with imagination into realms that are at once startling and captivating. He manifests those traits on this splendid recording where his compositions are zapped into a three-dimensional impact by Ernest Dawkins (alto saxophone and percussion), Joseph Bowie (trombone and percussion) and the 39-piece Infinity Orchestra from France which has some exciting and innovative musicians.