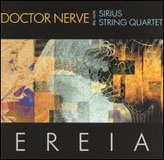 Founded in 1984 by guitarist/composer Nick Didkovsky, New York City based Doctor Nerve has been terrorizing audiences in the US and abroad with its distinctive blend of avant-garde classical, progressive-rock and modern jazz. On Ereia, the septet along with the Sirius String Quartet to perform a series of works that entails three movements recorded live and in the studio.

Didkovsky's compositional ideologies and/or implementations often defy categorization. The first movement sounds like some bizarre spin on a Country ...