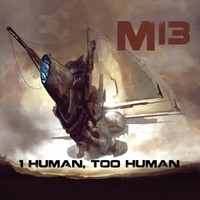 Chicago-based M13 is a thirteen-piece ensemble that projects a hip, little big band attack featuring many of the region's finest musicians. Led by saxophonist Aaron McEvers whose sprightly horns arrangements are often given a jazz-rock uplift by guitarist Chris Siebold, as the band invokes numerous shades of the jazz vernacular. They lash out into bracing swing vamps, streaked with melodic overtones and triumphant choruses, occasionally injected with moody interludes amid garrulous soloing sprees. McEvers even melds tricky, Zappa-esque time signatures ...

M13 is a well-groomed thirteen-piece contemporary ensemble from Chicago whose uncredited leader (and composer / arranger) is saxophonist Aaron McEvers, an Eastman School grad who moved westward from his native Detroit. 1 Human, Too Human is the group's first recording after a decade of “rehearsals" at Quencher's nightclub in the Windy City and elsewhere. As is true of a number of younger big-band composers, McEvers likes to infuse his writing with special effects, but once one gets past them the ...