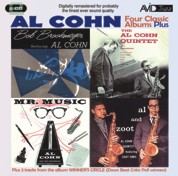 Saxophonist/clarinetist Al Cohn could have spent his life as either an arranger or a player, but fortunately he chose to do both, creating a series of records that weren't classics, but nevertheless reached the sublime and poetic elements of jazz. In this collection of four sessions, one is an orchestral session from the fifties, with charts by Cohn; the others are from partnerships, where Cohn tended to do his best work: one from his celebrated collaborations with Zoot Sims; and ...

Al Cohn: We Remember You 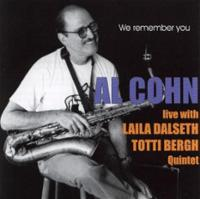 Al Cohn was a tenor saxophonist from New York, born in 1925. Sadly he died in 1988, but his performance at the 1986 Oslo Jazz Festival in Norway is documented on this live recording. On this session Cohn teams up with Totti Bergh also on tenor sax, bringing back memories of his many famous past partnerships with Zoot Sims. The first track introduces the female vocalist Laila Dalseth on the Gershwin ballard “Someone To Watch Over Me," ...