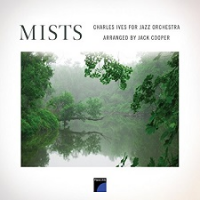 Meet Dr. Jack Cooper: Jack Cooper, has a wide range of experience as a performer, composer, and educator. His most recent CD recording of his compositions/arrangements, Mists: The Music of Charles Ives for Jazz Orchestra (Planet Arts Records, 2014) was released in August to critical acclaim in the Chicago Tribune and All About Jazz. His compositions and arrangements have been performed and/or recorded by the Dallas Wind Symphony, the Westchester Jazz Orchestra, the Woody Herman Orchestra, the ...

Charles Edward Ives (1874-1954), one of the first American composers of classical music to earn an international reputation, derived his inspiration from themes he had heard while growing up in Connecticut: hymns, traditional folk songs, marching bands (his father led one), patriotic songs, parlor ballads, Saturday night dances, and especially the melodies of the great Stephen Foster. Jazz composer / arranger / orchestrator / educator / saxophonist Jack Cooper, who was introduced to Ives' music by his mother, Georgie Cooper, ...

American composer Charles Ives (1874-1954) was an arts iconoclast in the vein of his contemporary poet Wallace Stevens (1879-1955). Both men were successful business executives who profoundly changed American art as an avocation. Ive's music brimmed with an Americana that sounds slightly sepia-toned today, but that has not prevented it's subjugation as subject for jazz interpretation, another piece of Americana. Theo Bleckmann and Kneebody's Twelve Songs by Charles Ives (Winter & Winter, 2008) set the patrician insurance executive's sound on ...

The Jazz Orchestra of the Delta is a 17-member big band lead by Jack Cooper and, on this present recording, featuring trumpeter Marvin Stamm and vocalist Sandra Dudley. The Memphis-based group and special guests direct their attention here to the music composed and inspired by Cole Porter. Dr. Cooper spent the better part of the last decade scoring these chestnuts, and his careful consideration is apparent in the effortless swing that the band brings to these pieces. “Love ...

The Delta in the Jazz Orchestra's name refers to the Mississippi Delta, specifically around Memphis, TN, where the five-year-old JOD is based. Formed in 1998 by composer / arranger Jack Cooper, the eighteen-piece ensemble is comprised of some of the finest professional jazz and studio musicians in the area. On its debut album, Big Band Reflections of Cole Porter, the JOD is bolstered by the remarkably talented trumpeter and big-band veteran, Memphis-born Marvin Stamm, who solos on four ... 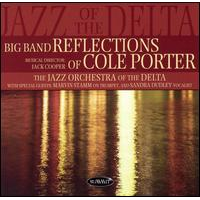 Cole Porter didn't set out to write songs for the jazz folks to sink their teeth into; but it's happened that way anyway. It seems any jazz artist worth their salt tackles Porter at one time or another. Charlie Parker had a field day; Ella Fitzgerald put out a couple of albums' worth of Porter songs. And Frank Sinatra's “I've Got You Under My Skin," written by Porter with Nelson Riddle orchestrating and Old Blue Eyes singing, is artistry at ...