Deanna Bogart: Timing is Everything 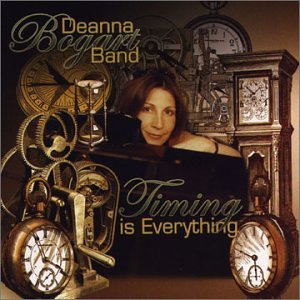 Mix blues, soul, and R&B together, add some sassy spice, and you have Deanna Bogart. Bogart has been a consistent presence in the blues world, having released albums on Blind Pig, Shanachie and Lightyear (to name a few); now she has taken full control of her career and artistry and formed her own label in order to release what is without question one of her finest recordings.

This album takes the listener on a journey of Bogart’s various influences, taking ...

Sometimes it takes a live recording for the public to finally fully appreciate a recording artist. Much like James Brown’s “Live at the Apollo” or Peter Frampton’s “Frampton Comes Alive,” the picture that is Baltimore ­ Washington, D.C. stalwart, Deanna Bogart, comes through loud and clear on her self released live album.

Vocalist/Pianist/Saxophonist Deanna Bogart has released several albums on several labels which are a ‘who’s who’(Blind Pig, Shanachie, Rounder, and Flying Fish) of the blues record business since 1990. ...