While ECM is a label largely renowned for its subtlety, attention to space and detail, and overall understated, “less is more" aesthetic--an early sampler titled, even, The Most Beautiful Sound Next To Silence--it's hard to imagine a label debut as a leader that could be less about virtuosity and more about creating soft atmospheres and ambiences than singer Theo Bleckmann's delicately moving, aptly titled Elegy. Bleckmann is no newcomer to the label: he was an important guest on ...

Theo Bleckmann and the Julia Hülsmann Trio at The Stone

Theo Bleckmann and the Julia Hülsmann Trio The Stone A Clear Midnight: Kurt Weill and America New York, NY June 21, 2015 In late June of 2015, vocalist Theo Bleckmann held residency at New York's The Stone. The venue's interdisciplinary hipness was epitomized by Bleckmann's week-long tenure, during which his offerings spanned the gamut from solo improvisations and the music of Kate Bush to the presentation of Kurt Weill songs reviewed here. For this ...

Theo BleckmannHello Earth! The Music Of Kate BushWinter & Winter2012The 1980s possessed an incongruous hope for the future against a backdrop of possible nuclear annihilation, as if in the darkest of times, society retreated to a naive state. This is a generalization that doesn't, obviously, represent the entire gamut of human experience, yet it was there all the same. The majority of singer and composer Kate Bush's music came from that decade, ...

Vocalist Theo Bleckmann is a man of numerous modalities and ambitions. He's covered classical composer Charles Ives, teamed with heavyweight guitarist Ben Monder for experimental and improvised sojourns and, more recently, has performed and recorded with the always hip jazz unit, The Claudia Quintet. Here, Bleckmann treks into the pop-rock realm as he imparts a personalized touch to the music of iconic British singer/songwriter, Kate Bush. Bush's use of electronics, layered vocal parts, and futuristic production processes are also noted ...

Before Robert Moog came out with the first synthesizer, before Adolphe Sax invented his famous reed instrument, before the trumpets sounded at Jericho, even before the world's ancient tribes tightened their animal skins to make drums, humanity's first instrument was the voice. Not that this is of particular consequence to Theo Bleckmann. “To me, that argument is completely moot because it doesn't matter what the first instrument was, it's what you make of it. Just because it may be the ...

Theo BleckmannHello Earth! The Music of Kate BushLe Poisson RougeNew York , NYSeptember 22, 2010 Kate Bush is an iconic singer in the UK and in many other countries. As a nineteen year-old, she released her first album The Kick Inside (EMI, 1978), which contained two major hits: “Wuthering Heights," based on a television adaptation of Emily Bronte's famous novel; and “The Man With the Child In His Eyes," which contained many ... 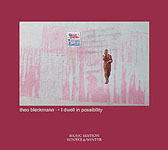 Were Theo Bleckmann Irish he would be a leprechaun, a magical bringer of joy and beauty with creativity and a sense of humor. Probably a more apt cultural consideration is viewing this vocalist/performance artist as the embodiment of all that was good, demiurgic, evocative, and provocative of Berlin during the explosively creative Weimar Republic period. Bleckmann is a daring and broadly talented artist fearing no type of artistic expression. A lover of sounds and gadgets, the singer has forged a ...