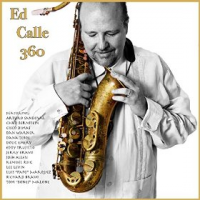 Miami-based Latin Grammy saxophonist Ed Calle follows up on his award-winning Dr. Ed Calle Presents Mamblue (Mojito Records, 2015) album, with the audacious Ed Calle 360 offering a dynamic selection of music presenting less of the Latin flavor and more of the contemporary side of jazz, with a touch of Nashville, fusion, Afro-Cuban as well as traditional material, tastefully performed with a decidedly boppish flair. A multi-Grammy nominee, who has graced the albums of such legendary artists as Frank Sinatra, ...

Lovers of Kenny G. and smooth jazz may find Sunset Harbor to be a nice place to visit--I did not. Although tenor saxophonist Ed Calle has worked with some recognizable talents over the years, Gloria Estefan, Bob James, Julio Iglesias, etc., I find nothing distinctive or original in his playing or his compositions. This is standard Latin-influenced, feel-good fare, sweetened by this genres ubiquitous vocal choir and heavy doses of layered synths. Sorry Ed, but I won't be docking at ...

More smooth Jazz, albeit with a more discernible pulse than some we’ve heard. Although axophonist Ed Calle, who was born in Venezuela, blends Latin rhythms to spice his music, it has been no less carefully sanitized for your protection. In other words, it remains closely related to Kenny G, in spite of Calle’s impressive credentials and his assertion that his goal as a musician is “to appeal to as many people as I possibly can without selling out or playing ...

Smooth jazz is comprised of blended sounds, hummable melodies, fluid embellishment, and a steady comfortable one-two-three-four beat. In the same way that the music fades in and out to create 3- to 4-minute excerpts, the listener’s attention tends to come and go. Thus, smooth jazz finds a home wherever and whenever folks want relaxing background music that suits their purpose. Saxophonist Ed Calle includes electronic sounds from bass & keyboard synths, programmed and mechanical drum patterns, and background vocals to ...