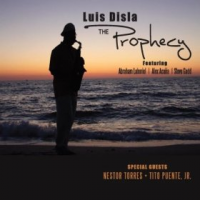 One quick way to verify a musician's credentials is to check out who plays on his debut record. Respected reed man Luis Disla obviously called in a few markers for The Prophecy , assembling an all-star lineup and achieving a glossy production in the process. No stranger to the studio with numerous sessions accounted for, Disla is prodigious on alto, tenor, soprano and baritone saxophones and relies on his expertise on all of them. He chooses the ...