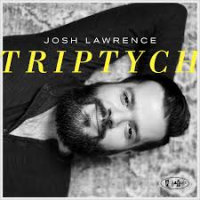 Triptych succeeds on the connection between Josh Lawrence's writing and a coterie of players with whom he has been associated for several years. A brilliant, enterprising band comprised of the leader's trumpet, pianist Zaccai Curtis, his brother, bassist Luques Curtis, alto saxophonist Caleb Curtis (no relation), and drummer Anwar Marshall readily embrace the contours of Lawence's compositions and inhabit the roles required by the music, while simultaneously bringing their own idiosyncrasies to the table. In an age when artists often ...

On Contrast, Josh Lawrence and Color Theory's second recording for Posi-Tone, the group executes a classic framework held together with tight chemistry. Lawrence may be the leader, but the gist of the end product is a very democratic arrangement where no one musician or group of musicians takes precedence. Each shine at various times throughout Contrast. The album is a fairly straightforward endeavor displaying solid, classic jazz in form and execution. It's at the sixth track, “Gray" that ...

Josh Lawrence & Color Theory's Contrast features a host of varied, sturdy and invigorating compositions by the leader, an ensemble that plays them with élan, a number of arresting soloists, and a rhythm section that rapidly moves between sly and rambunctious. While all of these factors are important, they don't adequately capture the record's essence. Perhaps another way of looking at Contrast is that a number of somewhat familiar elements exist side-by-side with an abundance of bold, startling moments that ...

Trumpeter Josh Lawrence has had a long and diverse trek to where he is now. Beginning in his native New Jersey, he has embraced jazz culture in Philadelphia, Europe, and finally New York City, where he has gained a solid reputation as a musician, bandleader, and composer. On his second release for the Posi-Tone label, Lawrence explores several different avenues of musical expressionism with his “Color Theory" project. The new record, entitled Contrast, digs into the counterpoint of ...

Josh Lawrence Quintet Chris' Jazz Cafe Philadelphia, PA February 5, 2016 Josh Lawrence is a top-of-the-line, ascending trumpeter/composer/bandleader in Philadelphia and New York who in a few short years has three solo albums under his name, is a member of Orrin Evans' Captain Black Big Band and is co-founder of the hot new ensemble, the Fresh Cut Orchestra. He is also a member of Bobby Zankel's Warriors of the Wonderful Sound and an active ...