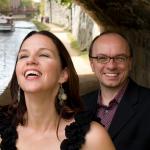 Meet Ken Avis:London, Paris, Geneva, Washington DC guitarist/vocalist Ken Avis never imagined he would live in these cities after growing up in a Northern English coal mining town close to Liverpool. After travelling in over 80 counties, across four continents, he is now based in Northern Virginia with his wife, the stunning French Canadian vocalist Lynn Véronneau. Together they are putting their world experiences to good effect in the eclectic, multi-national music of their band, Véronneau.