Ranjit Barot is a well-known figure in India's music industry, where for many years he has written film scores, produced Indie pop, and, more recently, composed and directed the music for the opening and closing ceremonies of the 2010 Commonwealth Games, which were held in Delhi. Barot, who spent the first 12 years of his life in England, came to a wider audience as the drummer on guitar icon John McLaughlin's outstanding Floating Point (Abstract Logix, 2008). McLaughlin--who knows a ... 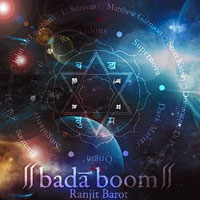 It's a Big Bang alright--bada in Hindi means big--a project of some ambition which unites the finest Indian musicians with some of the best from the jazz and fusion worlds. Together, they conspire to articulate Indian drummer Ranjit Barot's primal scream as a composer, and it's a spectacular and beautiful explosion. Barot spent his first twelve years in England, and this duality makes for a powerful musical cocktail, whereby diverse rhythmic, melodic and harmonic elements coexist as naturally as the ...

He was the rhythmic center of John McLaughlin's Floating Point (Abstract Logix, 2008)--an album that found the fusion guitar great exploring his decades-long interest in an east/west nexus from the electrified and harmony-centric angle of the jazz tradition, rather than the opposing angle of his longstanding and largely acoustic Shakti and Remember Shakti groups, which weighed more heavily on Indian music's linearity and polyrhythmic complexity. Now, reflecting Ranjit Barot's assimilation of the fusion and progressive rock music that he heard ...