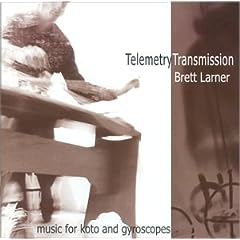 In the recent American discovery of traditional Japanese music, instruments like the koto and the shakuhachi have become more popularly utilized. One of the distinguishing features of the koto, a string instrument, is its staccato sound, due to its extremely limited sustain. American instrumentalist Brett Larner conceived a very unique solution to circumvent this limitation. His approach appears on Telemetry Transmission. By placing gyroscopes on the strings of the instrument, Larner creates a whole new sound, consisting of broad sweeping ...

Brett Larner is a master of the Japanese guitar-like koto, on which he has recorded a breathtaking series of duets with Anthony Braxton. On this fine disc he is joined by fellow koto player Shoko Hikage, along with Philip Gelb, who wields another traditional Japanese instrument, the flute-like shakuhachi.

This is improvised music that is formed and guided by the traditions and possibilities of these instruments. For although the music is improvised, apparently without much of anything in the way ...

A friend of mine vehemently despises purely improvised music. She refers to free improv as “that genre that refuses to die.” Furthermore, she has predicted that “free improvisation will ultimately be proven to be the gimmicky and cliché-ridden beast that it is as it dead ends with Western practitioners resorting to non-Western instruments to realize their feeble aims.” (Whew...this lady doesn’t mince words, does she?)

Thus, as a fan of improvised music, it was an unnerving coincidence to read the ...