Piffaro: Back Before Bach: Musical Journeys 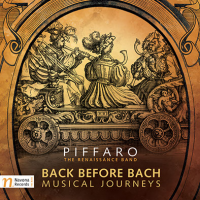 Johann Sebastian Bach did not develop as an artistic entity in a vacuum. While he may be considered the intellect that whipped music into some semblance of order, he was, by no means, the first to start or try to do so. Piffaro, The Renaissance Band, last written about by this critic on Music From the Odhecaton (Dorian, 2002), is a historically-informed ensemble not playing on modern instruments, but their precursors: Shawms, recorders, sackbuts, douçaines, harps, and bagpipes. On Back ... 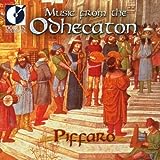 Piffaro is a wind septet who specializes in playing Renaissance wind music in an historically informed fashion on period instruments. These instruments are not the standard fare we are used to hearing today. However, they are the precursors. Shawms, recorders, sackbuts, douçaines, and bagpipes all combine to form a type of peasant symphony. To date, Piffaro has released six recordings that highlight Spanish, Italian, French, German, and Flemish Renaissance wind music both from the Royal Courts and from the peasantry. ...