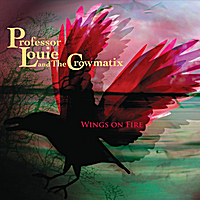 Professor Louie (Aaron Louis Hurwitz) and the Crowmatix hail from the artist colony, Woodstock, NY and have backed guitarist Rick Danko (The Band) amid other projects, along with their notoriety as supreme audience pleasers during live performances. Yet part of the magic lies within the group's harmonically attractive song-forms, replete with memorable themes and the Professor's resonating vibrato-inflected vocal delivery. The ensemble plays several of The Band's comps during live shows and from an organic, honky-tonk standpoint, there ...

Professor “Louie", aka Aaron Hurwitz, played a major role--as co-producer, thrice--in the revival of The Band's recording career. The Band: the Hawks behind Rockabilly Ronnie Hawkins in the late fifties ("Who Do You Love); Dylan's sizzling, frenetic mid-sixties touring unit; “The Weight", “Up on Cripple Creek", “The Night They Drove Old Dixie Down", “Stage Fright". That Band.That quintessentially American group (four-fifths Canadian)disolved after “The Last Waltz" (memorialized in the Marty Scorcese film), but got back together again--without former ...