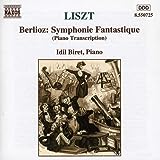 Symphonic Transcriptions for Piano, Part I

In music, Franz Liszt was the quintessential Byronic Hero. Like his modifying Romantic namesake, George Gordon (Lord Byron), Liszt was a beautiful, talented, and fundamentally flawed artist. Where Byron could toss off rhyme and piss drunk better than any of his contemporaries, Liszt could perform his most difficult compositions while planning his next rendezvous with an aristocratic wife. Liszt represents the essence of Romanticism. The father of several illegitimate children, Liszt saw his daughter ...