Another stellar album is out there from Pianist Eldar Djangirov and we play music off of it. Also, we honor the great Mike Longo and Harold Mabern. Enjoy the jazz. Playlist Eldar Djangirov “Devotion" Once Upon a Time (Twelve Tone Resonance, LLC) 00:00 Host talks 5:50 Marian McPartland “Smoke Gets in Your Eyes" Reader's Digest Presents (Reader's Digest) 7:47 Bill Frisell “Beautiful View" Big Sur (Sony) 9:53 Host talks 13:51 Mike Longo “Times Square"The Earth is but One ...

Riding the crest since his powerful mid-2000s debut, pianist Eldar Djangirov entertains with a myriad of styles, shapes and colors. They all seem to fit him as well as personally designed piano shoes. It falls short to say that this record is dynamic. It fuses genres into a singular, yet wide, creation that features seven original compositions and four imaginative interpretations from Bach to Dizzy Gillespie and from Soundgarden to Art Tatum. The trio is energized, and completed by bassist ...

Eldar Djangirov... None other than Dave Brubeck declared him a genius. Dr. Billy Taylor called his music a “brilliantly complex discipline." So, when inevitably asked who the masters of their craft may or may not be, does Eldar Djangirov immediately roll off anyone's tongue? More than likely not. And, with more than a handful of hot releases—the 2007 Grammy-nominated Re-Imagination (Sony Music), the flawless and much acclaimed Three Stories (Sony Music, 2011) and the mad energy rush of ...

"Point Of View Redux"--the eight-minute-long opener on pianist Eldar Djangirov's Breakthrough--doesn't exactly say it all, but it says a hell of a lot. A firmly delivered flourish flies through the air in the opening seconds, a rollicking riff sets things in motion as titan-like technique powers the warp-speed explorations that follow, things take a bluesy turn for a spell, and Djangirov generates enough energy to power an entire city block along the way. This aptly-titled number serves as a musical ... 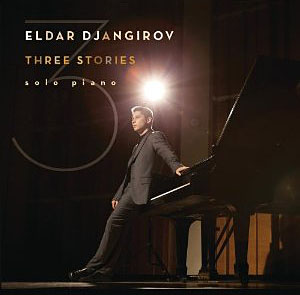 The “child prodigy" tag can be a blessing or a curse. Some people who are labeled in such a manner spend the rest of their lives trying to live up to a reputation that was forced upon them at an early age, while others simply mature and grow into themselves, ultimately capitalizing on the attention they received in their youth. Eldar Djangirov falls into the latter category. While Djangirov--in his early twenties when this album was recorded--can still be considered ...

Since emerging on the worldwide jazz scene in 2004, pianist Eldar Djangirov has been touted for the classical skill he brings to standard jazz and original material alike. With Three Stories, Eldar attacks the classical repertoire itself, mixing a pair of Bach pieces, and one from Alexander Scriabin, with standards by the likes of Sammy Cahn, Charlie Parker, Thelonious Monk and George Gershwin, plus a few originals. The three stories--classical, standards (or popular music--he also covers a Dave Matthews tune) ... 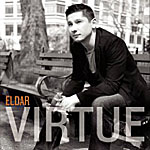 Virtue is Eldar's fourth album--his sixth, if his early independent releases are included--something of an achievement for a musician who was only 22 years old at the time of the album's release. The album further affirms the Kyrgyzstan-born, New York-based musician's deserved reputation for technical ability. Across the 11 tracks Eldar shows speed and virtuosity--on one or two ballads there are also welcome signs of a developing awareness of the impact of space and silence. Throughout the ...