London Improvisers Orchestra Lio Leo Leon Psi 2011 Each year at London's Freedom of the City (FOTC) festival of improvised music, one of the most eagerly anticipated highlights is the Sunday evening appearance of the London Improvisers Orchestra (LIO). Although the LIO meets monthly throughout the rest of the year, on the first Sunday in May at FOTC they seem to produce something a bit special, not least because there is always a good ... 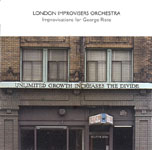 Even before the crisis of capitalism, 2008 was not the most auspicious year for improvised music in London or in Britain generally. Early in the year, the closing of the Red Rose club in Seven Sisters Road robbed improv of one of its strongholds, a decent-sized venue that charged reasonable entrance fees. The fallout of the loss will be felt for years to come. The club hosted such events as the annual Freedom of the City festival and monthly club ...

Consisting predominantly of British free improvisers, this consortium is captured in live performance at the Freedom of the City festival on two dates: May 4, 2003 and May 3, 2004. With over thirty musicians, the orchestra's creative ways are partly signified by call and response dialogues, layered horns, and multicolored contrasts. Effectively, the artists pursue a stop/start and regenerative process via a community-minded approach. Speckliing their notes with stabs at humor and wit, the musicians also pursue brash cadenzas with ...

Cooking becomes significantly more complicated when you mix a lot of ingredients. This edition of the London Improvisers Orchestra features 37 musicians, and it's a prodigious combination: five clarinets, six saxophones, three cellos, four drummers, and so forth. The players here represent some of the most talented improvisers on the British scene. The LIO gets together every month at the Red Rose in London, so these players have quite a bit of shared experience. But you might as well give ...

Proceedings by the “London Improvisers Orchestra” could also serve as a – comprehensive guide to large-scale improvisational deployment – or perhaps a nice composite glimpse of the current British Free-Jazz movement. A 2-CD set featuring a Who’s Who of modern day stylists along with those who helped write the book such as saxophonists Evan Parker, Lol Coxhill, bassist Simon Fell and others of note, Proceedings is a grand exposition of loosely composed motifs based upon on divergent topics.