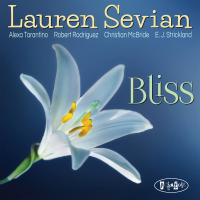 Since joining the Mingus Big Band in 2003, baritone saxophonist Lauren Sevian has been opening eyes in the saxophone world, especially in the exclusive club that includes those dedicated primarily to the bari. Her style more resembles that of modern tenor players such as Donny McCaslin and Mark Turner, while retaining the pure sound and articulation one might expect from a true baritone master. She as well has been a powerful role model for female jazz musicians and the current ...

Swaying slightly, with eyes closed, Lauren Sevian pours a lot of heart and grit into the big, baritone saxophone--the largest of the most commonly played saxophones and an axe that looks even more considerable when seen against her small frame. She comes out with an imposing sound and welcoming style, put forth through a striking conception. Sevian is a hard-working New York musician who's coming into higher recognition, abetted by some of the coolest big band gigs, including ...