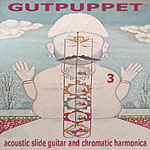 This duo continues its down-home and good timey vibe--all subsidized by monster chops and acute vision. Acoustic slide guitarist Scot Ray and chromatic harmonica player Bill Barrett are recognized for their multifarious modern jazz undertakings on the Southern California scene. (Initially, Ray honed his reputation as a crack trombonist.) This third release by Gutpuppet expands the twosome's previous efforts, abetted by the adage that variety can be the spice of life. Roots-drenched, emotive and occasionally rabble-rousing, the musicians morph their ...

On paper, it would seem rather unlikely that a world-class modern jazz trombonist would double as a badass Dobro slide guitarist. But with this effort, Scot Ray lays down his horn to strum, slide, and pick alongside improvising chromatic harmonica ace Bill Barrett.

There's a lot to dig about the duo's second release, as the artists' closed-knit improvisations are engineered upon folksy themes and a predominately, wide-open layout. They mix Delta blues, folk, and Civil War era slants ...