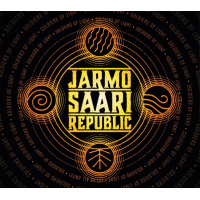 In a video introducing this band, Jarmo Saari claims that in his career as Finland's most widely-recognized modern guitarist he is maybe in the wrong niche. But listening to his latest album, and comparing it to his first releases in the mid 1990s with ZetaBoo, even if he doesn't play drums it is obvious that he is happiest when accompanying a powerful and enervated rhythm section.  Whereas his early work frequently utilized Brazilian and Latin rhythms, he ...

Jarmo Saari Republic G Livelab Helsinki February 28, 2019 Jarmo Saari has been making music on the Nordic scene for more years than most of us care to remember. As a child he was involved in the Tapiola Choir in Espoo, the Helsinki suburb synonymous with high art of visual as well as musical nature. As an adult he has been involved with music often associated the visual, at least since his sophomore album A ...

Jarmo Saari's Republic Louhisali April Jazz Tapiola, Espoo, Finland April 26, 2014 Spring in the north of Europe is long awaited after the long dark winter months, and with the yearly arrival of April Jazz in the eastern Helsinki suburb of Tapiola the ears of the city's musical community inevitably orientate in this direction. Every year this mini festival brings a host of American musicians for solo concerts and for late night interplay with ... 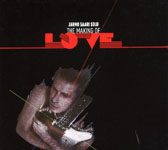 As Jarmo Saari explains on his website, the topic of The Making of Love has motivated and emasculated humankind since the beginning of time. So do we need yet another interpretation?

The album expands the Finnish guitarist's already long discography, which ranges from a big band suite for the UMO Jazz Orchestra to his first solo album, the guitar-based excursion into madcap and mischievous electronica Solu (Rockadillo, 2004). On all his releases Saari shows his mastery of traditional guitar rhythmic ...

The use of realia on disc might well have gone the same way as Syd Barrett's homemade attempts to capture the sounds of a live motorbike for his piece Rhamadan--into the cutting bin. But his progenitors succeeded with the same sound for Atom Heart Mother , and the recording industry progressed towards today's super sampling scenario. “Finland's hardest working professional guitarist" Jarmo Saari is doing his modest best to undo and yet confirm this trend some way by creating his ...

Jarmo Saari: Portrait Of A Guitarist As A Young Man

Among the countless number of strummers and pickers the world over, there may be a small fraction who do not consider themselves to be artists! There must also be a small number who have only produced a handful of well-respected though modestly selling albums, but who still consider that the meaning of their lives is defined in these and their future releases. Jarmo Saari is a representative of this latter category. Saari has been described by Finnish music critic Petri ... 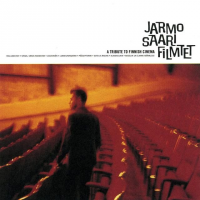 One of the few things more obscure than Finnish jazz is Finnish cinema, and even more obscure would be Finnish film music. Guitarist Jarmo Saari fuses together these little known elements and creates a surprising and delightful jazz revue of all three. In the process, Saari's Filmtet also highlights the strengths and weaknesses of many contemporary jazz artists. At moments the Filmtet improvises with imagination and flair, but at others they retreat into mere adaptation of the source material.