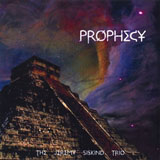 Jeremy Siskind is a twenty-one year old pianist and composer currently studying at the Eastman School of Music in Rochester, NY. The self-produced Prophecy was recorded several months after a March 2006 appearance on Piano Jazz, Marian McPartland's long running National Public Radio program. Siskind's nascent style is situated in the jazz mainstream, exhibiting traces of pianists ranging from Oscar Peterson and Keith Jarrett to McCoy Tyner. He composed the disc's eleven tracks, an assortment of jazz, gospel, and classically ...