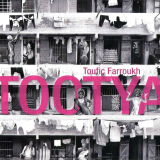 On its own terms, Lebanese saxophonist Toufic Farroukh's Tootya is largely a success. What it seeks to be is a sophisticated--and at times pretentious--mash-up of Arabic popular and light-classical music with techno beats, Western pop, and a little Latin jazz, presumably targeted at upper middle class listeners in the Middle East and their brothers and sisters in the worldwide diaspora.It's perhaps more interesting to listen to Tootya as a jazz album, if for no other reason than that ...