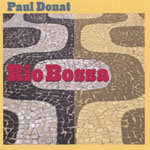 Some good news about Brazilian music is received from the North Country. Canadian bandleader Paul Donat brings Rio Bossa to fellow enthusiasts in Canada as well as abroad.

Donat is an acoustic bassist and guitarist/vocalist, bitten by the bossa bug in the early 1980s. Traveling to Rio, he worked in a nightclub there for two-and-a-half years, inviting different musicians to join him each night.