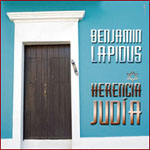 Benjamin Lapidus is a 36 year-old musician, born in Hershey, Pennsylvania, who spent a childhood resettling some fifteen times before returning to New York at age 14. His cultural Jewish upbringing and family residence in Latin neighborhoods of New York fused these two musical cultures and Herencia Judia is a serious and most ambitious effort that legitimizes the combination.

Lapidus' expertise is featured on the tres, a small three string Spanish guitar. The basis of this album arose ...

Latin music scholar and Cuban tres master Benjamin Lapidus expands the definition of the new breed of Latin-Jewish music on his new solo disc, Herencia Judia. Lapidus has worked in the past with renowned free jazz masters such as Steve Lacy and Joe McPhee, and took part in other Jewish music projects such as the recent La Mar Enfortuna's Convivencia (Tzadik, 2007) or the collaboration of percussionist Roberto Juan Rodriguez with Algerian pianist Maurice El Medioni, Descarga Oriental (Piranha, 2006). ...